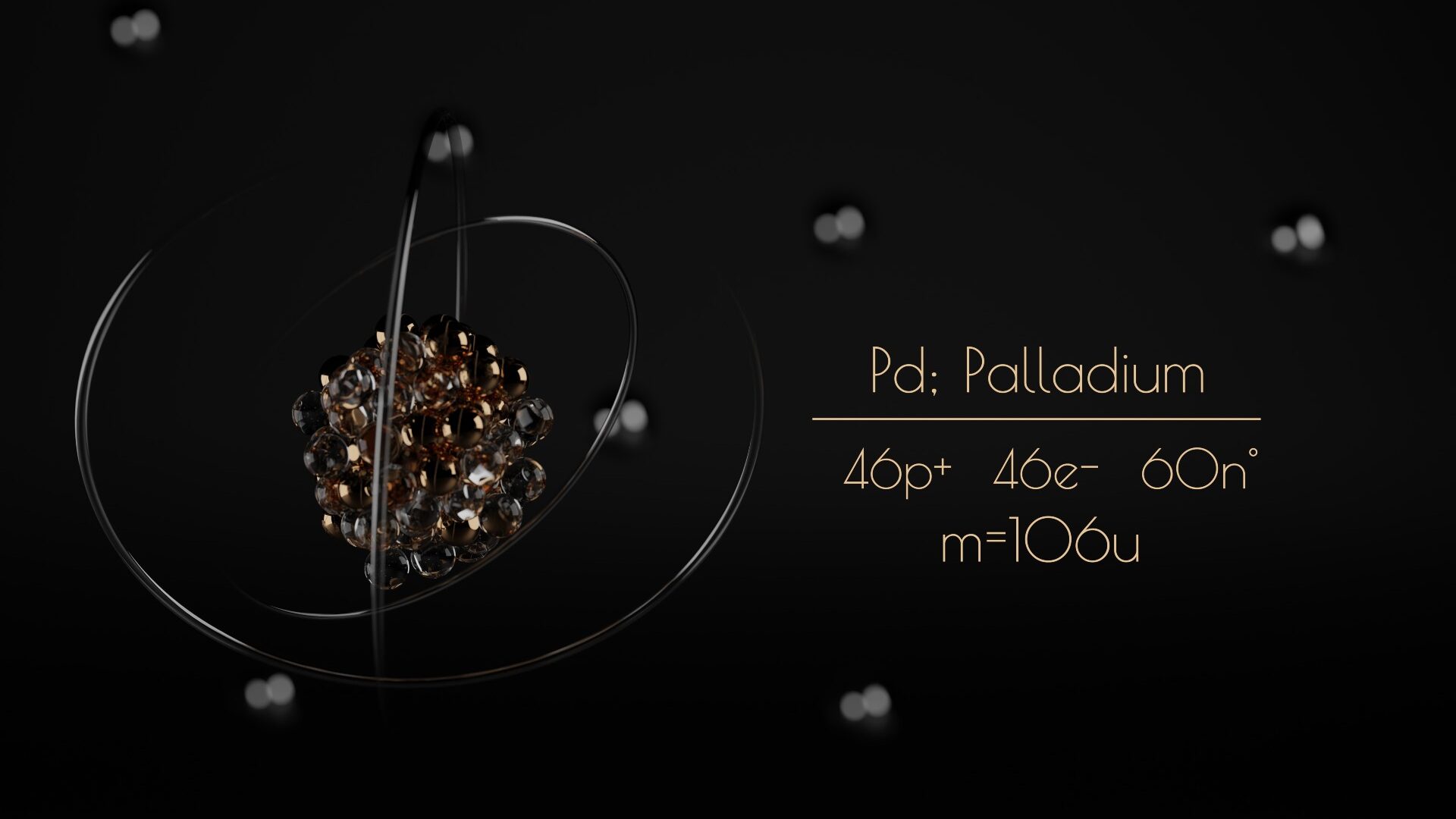 Palladium is a chemical element that at room temperature contracts in the solid state. Metal used in industry. Mineral extraction concept.

Palladium is a silvery-white metal is named after the asteroid Pallas, as well as being named after the Greek goddess of wisdom, Pallas. The metal does not tarnish in open air and by mixing Palladium with Gold produces white gold that is used in the jewelry industry. Closely related to platinum, it’s used in dentistry, watchmaking, surgical instruments, and electrical contacts and is a member of the Noble metals and Platinum Group Metals.

Palladium is a powerful antioxidant. As an example of a direct application in fat cells, when the molecular reconfiguration of fat cells begins to take place and the fat is reallocated for burning, in many cases free-radicals are released into the blood stream as oxidants, and Palladium does a superb job containing and eliminating them. It also works to strengthen the liver and kidneys, which are tied through traditional healing methods and modalities the world over to one’s vitality, or life-force, if you like, which when increased also increases the internal fire, for more vigorous and healthy sexual functioning.

Palladium also smooths the walls of the intestinal tract, is an anticoagulant, increases stomach acids and enzymes for more efficient digestion, and calms the heart. Pound for pound, it’s the strongest of all metals, and this reflects in an increasing muscle and tissue strength and stamina in the user. It is also said to increase the presence, efficiency and distribution of oxygen, and therefore assists in more efficient and uninhibited circulation. Over the last few years, it has been gaining some serious ground in health and healing circles, especially in peak performance athletics.

The atomic number related to Palladium on the periodic table is 46 and has the remarkable ability to soak up hydrogen like a sponge — that is, if you can imagine a sponge that soaks up hundreds of buckets of water. At room temperature and  the with optimal atmospheric pressure, palladium can absorb up to 900 times its own volume of hydrogen. “That means,” says Khalid Mansour, “that if you were to pump hydrogen into a bottle, it would take enormous pressure to store the same amount easily absorbed in a palladium bed of the same volume.”

This makes palladium an efficient, safe storage medium for hydrogen and hydrogen isotopes, such as tritium, a by product of nuclear reactions. Nevertheless, the microscopic details of how this absorption process works are poorly understood. Better understanding of what happens at the molecular level, such as phase changes that occur as hydrogen fills the metal — forming a metal Hydride — and the effect of defects in the material, could give clues to designing metal Hydride that perform better. Such research also bears directly on technologies that use metal Hydride’s in fuel cells and batteries.

At Westinghouse Savannah River Company (WSRC) in South Carolina, Mansour (now at Cray Research), Ralph Wolf and their colleagues Myung Lee and Clemson University physicist John Ray are working to fill-in the gaps of knowledge. “Basically,” says Mansour, “the experimentalist did things by alchemy. We know that palladium has this remarkable ability to soak up hydrogen, but there’s a lot we don’t understand”