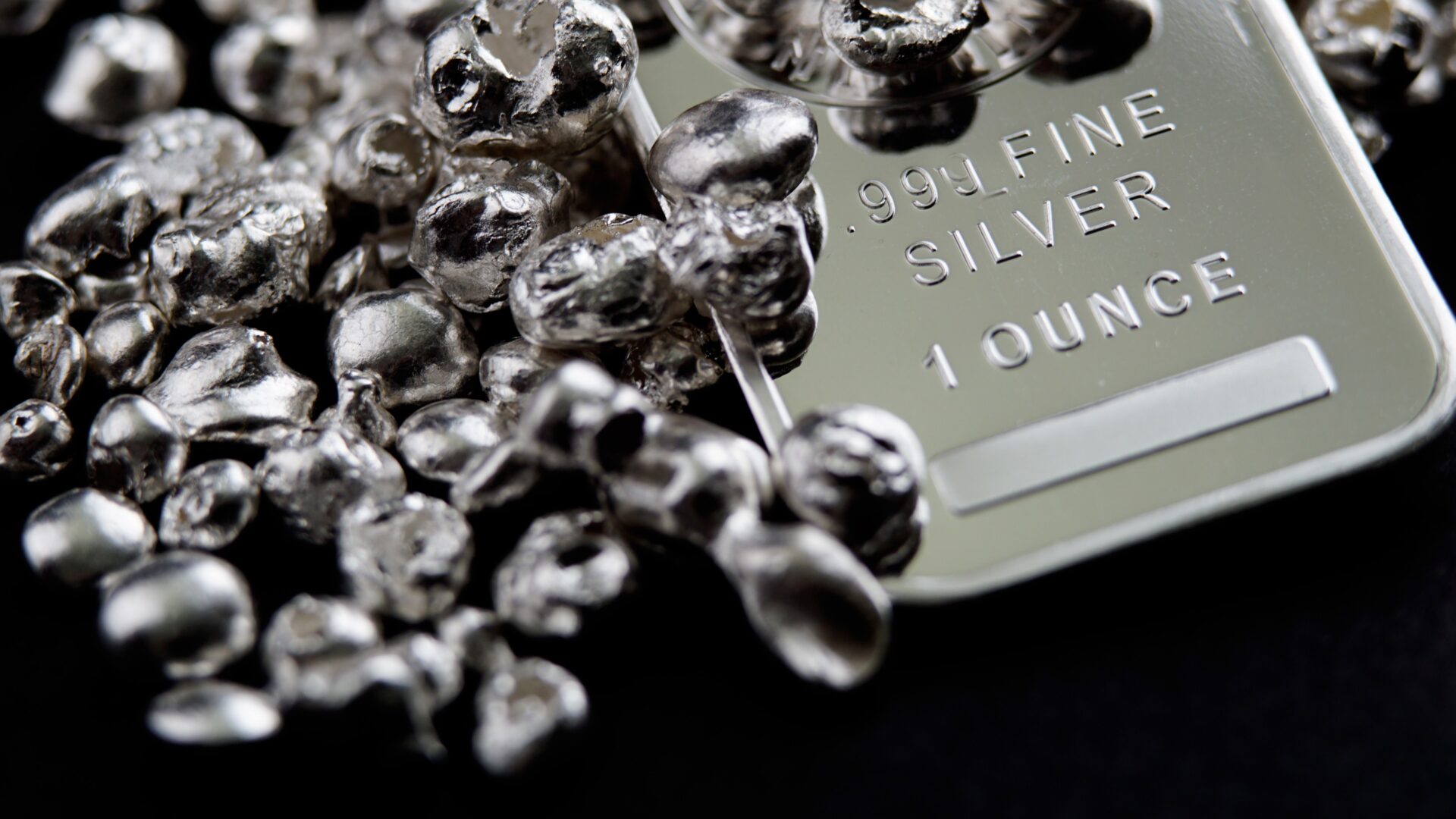 Silver is a chemical element with the symbol Ag. Silver is a relatively soft, shiny metal. It tarnishes slowly in air as sulfur compounds react with the surface forming black silver sulfide.

Silver is used to make mirrors, as it is the best reflector of visible light known, although it does tarnish with time. It is also used in dental alloys, solder and brazing alloys, electrical contacts and batteries. Silver paints are used for making printed circuits.

Silver bromide and iodide were important in the history of photography, because of their sensitivity to light. Even with the rise of digital photography, silver salts are still important in producing high-quality images and protecting against illegal copying.

Silver has been used by mankind for thousands of years, back to ancient Greek and Egyptian times to protect against Smallpox, Plague, Syphilis, mumps, measles, polio, typhoid, typhus etc. The aristocracy of Europe used silver utensils and kept their wine in silver goblets where it fermented into vinegar forming ionic silver acetate which they would drink. The absorption of ionized silver (ions not nanoparticles) caused a blue skin discoloration which is why they were called the “Blue Bloods”.

Silver solutions were widely used for babies eyes, infected wounds and infectious diseases before the advent of antibiotics in the 1940’s. It is now being recognized again as a useful broad spectrum anti-biotic which can be taken orally or topically. It is also published that Colloidal Silver has a inhibitory effect on transmissible virus-induced host cell infections

Colloidal Silver typically contains only trace concentrations of up to 50 ppm of Silver (and Gold).  To demonstrate how little this is, commercial water labeled as “Sodium-Free” has 10 ppm of Sodium. Size controlled delivery of nanoparticles is an extremely important aspect of our technology including the influence of size of silver nanoparticles.

Colloidal Silver has minimal effects on benign bacteria of the colon because Colloidal Silver is rapidly absorbed into the mouth and small intestine.  Taken orally, properly prepared mono-atomic silver in the form of Colloidal Silver could regain its rightful place as the safest, most effective antiviral agents.

Research shows that silver is effective in concentrations of 0.01 to 0.04 ppm and even 20 parts per billion (0.02 ppm), especially when the water is exposed to the silver for long periods of time.  The solution can be used as a concentrated (20-50 ppm) and taken in small doses, or can be diluted into the drinking water supply at a concentration typically of 0.1 to 1 ppm. This for example helps to inhibit Hepatitis B virus replication. Research also reveals that Colloidal Silver has been apart of experimental RSV infections.

Colloidal Silver  seems to have an exceptional range of effectiveness such that it has been used in situations of morbidity either alone or in combination with other remedies, .

It is also published that silver nanoparticles has inhibitory effects on H1N1 influenza A as well as the complete destruction of the germ, Staphylococcus aureus located in the nose.  CS also works as an antibacterial against Listeria monocytogenes.

During times of natural disaster and in tropical countries, it is an ideal inexpensive water sterilization and disease prevention regime.  In farming, veterinary medicine and fish hatcheries, all animals and aquatic fish should have a regular supplement of Colloidal Silver .

In agriculture, sprouting and horticulture Colloidal Silver  has usefulness on plants by slowing down the wilting process as well as protecting against parasites.  Minute traces of metallic silver in atomic form are reported to have the unique property of inactivating several strains of bacteria, certain viruses, molds, fungi, protozoa parasites and possibly prions (infective protein causing brain damage).  In its elemental, atomic (non-ionic) form, silver has no toxicity, no cumulative side effects nor does it give rise to resistant strains, unlike some antibiotics. Colloidal Silver technology is also being considered in antimicrobial food packaging.

Dr. Robert O. Becker, MD, noted bio-medical researcher from Syracuse University, and author of “The Body Electric” and “Cross Currents”, recognized a correlation between low silver levels and sickness. He said silver deficiency is responsible for the improper functioning of the immune system. According to Dr. Becker and Dr Gary Smith, silver is an essential mineral for proper functioning of the immune system and for the repair of injured tissue. Analyses of individuals with severe immune deficiency often indicate a lower than normal level of silver in the body which should be .001%.  Colloidal silver literature recommends a maintenance nutritional dose of at least 100 micro-grams of silver daily to counteract  immunodeficiency.

As we grow older our immune systems decline in function at an average rate of 1% per year. This system not only defends the body from poisons and outside invaders, it is also responsible for cleansing the body of toxins, and is also responsible for the creation and feeding of new cells. The immune system is a central computer whose function is to maintain good health. When we reach the age of 18 to 21, the immune system is functioning at peak efficiency. When we are younger, we can fight off minor infections but as we grow older, trivial infections or colds may turn into life threatening events.

A good immune system should be able to withstand common ailments such as a cold, flu, or Candidiasis, herpes. Even the more serious illnesses of cancer, chronic fatigue syndrome and AIDS could be deterred if the human immune system were strong and vital. Over the last century, human (and animal) immune systems have been getting weaker likely due to global pollution combined with lack of essential minerals in the soil. While at the same time, destructive, illness-causing microbes have been getting stronger due to the overuse of prescribed antibiotics.  An antibiotic may kill most of the harmful bacteria. However, some of the bacteria survive to breed stronger cells which then become resistant to the antibiotic. There are now strains of super-microbes that cannot be destroyed by any known prescribed antibiotic. There is a crisis brewing in the condition of life on this planet. Most humans are functioning with a borderline internal immune system often insufficient to fight off disease.

The modern immune system is overtaxed daily with the constant bombardment of chemical pollutants in the air, water and even our food. Before 1940, most of our food was grown using organic, natural fertilizer. The soil and natural fertilizer contained many trace chemicals necessary to the human body which supported its natural defense system. Today, the soil itself is far less vital and the fertilizers are synthetic, chemical versions which have none of the trace elements found in organic fertilizer. One of those essential elements which has been disappearing from our food supply is silver. If we eat plants grown on chemical fertilizers, as most plants are grown today, without living organisms in the soil to help provide nutrition to the plant, we do not get the quality of vitamins and minerals that are available in organically grown foods. Thus, deficiencies develop. As the tissues age, or if we cannot assimilate silver for some reason, we develop a silver deficiency and an impaired immune system that could possibly lead to cancer and other diseases.

Over the last 20 years there has been hundreds of references supporting the wide range of uses of silver nano-crystals on bacteria such as E Coli, MRSA, Streptococci, Salmonella, Legionella and on viruses such as HIV-1, hepatitis, herpes, Norovirus,  and the common flu.

Studies have also been conducted on the effectiveness of Colloidal Silver  in the healthcare industry.

Biophysica’s Generator’s produced Colloidal Silver is an advanced form of crude/generic Colloidal Silver (CS).  It  is the result of years of research  to produce the highest quality product and cannot be compared to crude CS as sold world-wide, since CS is still made by a rapid crude method which results in ion formation and  unnecessarily large particles greater than 20-50 manometer’s.  Colloidal Silver has all the undoubted benefits and more of CS.  Colloidal Silver is made from pure, chlorine-free water electrically charged (Zeta Potential) so as to alter the structure of the molecules of the water.  We use large solid sheet electrodes of silver (and gold) to pass very weak electrical signals through the water slowly over 48 hours rather than over-driving the electrodes in a few minutes as is typical in the making of crude colloidal silver.